Sisters of the Good Shepherd

The Sisters of the Good Shepherd have served women and families in United States since 1842. We are a world-wide congregation serving people in 73 countries. Our mission is one of mercy and reconciliation, to be the living image of Jesus the Good Shepherd who searched for those out of the way of love. Our work is to help people realize their dignity and self worth and to experience the healing and reconciliation that Jesus offers. The sisters take a fourth vow of Zeal to labor for the salvation of souls.

In the United States, we sponsor counseling centers, post-abortion healing ministries, GED programs for adults, spiritual direction and prayer, residential treatment centers for troubled teens, domestic violence shelters, and residential programs for adult women with various rehabilitation needs. Our contemplative sisters pray daily for the needs of the world, especially for all the people served in our ministries. 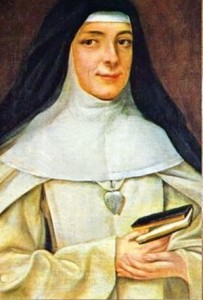 St. Mary Euphrasia was born Rose Virginia in Noirmoutier, France in 1796. Her parents were arrested during the French Revolution, because her father was a doctor who cared for anyone who was in medical need. Rose was born after her parents were released from prison. She grew up on a small island on the Atlantic Ocean and enjoyed the freedom of spending many days at the beach. She lost two siblings when she was young, and her father died when she was 10. When she was 13, her mother sent her to boarding school on the mainland. Her mother died while she was at this school, and was buried before Rose knew anything about it. Her brother-in-law became her guardian when Rose was 17. These deaths affected her greatly and she was very lonely at the school. Rose Virginia knew much suffering during her formative years. It was during this time that God worked powerfully in her soul and she had a great desire to serve God and people who were suffering. She entered the Sisters of Our Lady of Charity who had independent convents in several cities in France. St. Mary Euphrasia saw a great need to expand the work of helping women and girls who had no family or were in great difficulty. The poverty of her times was great and many young people lived on the streets. She got permission to expand the work throughout France and the world. During her life time, St. Mary Euphrasia founded 110 houses on all continents of the world, during the time of sailing ships and travel by coach. She was canonized in 1940.